One man will do anything to keep her safe.
The other will do anything to see her dead.
For the last five years, I’ve been living as Olivia Tucker. With a cautious eye over my shoulder, I’ve been hiding in Seattle, staying anonymous, keeping a low-profile at a small interior design company.
Until Grant Brexton.
Billionaire, CEO of Hall and Brexton, he’s known as Seattle’s Best Playboy, the man who keeps Seattle under his heel.
As his new personal assistant, our attraction should be forbidden.
But Grant isn’t merely a man who sets my heart on fire.
He teaches me to be as strong as he is.
To live ruthlessly and without apologizing.
Most of all, Grant teaches me how to stop living in the shadows of fear.
Our love is unstoppable. Our bond is unbreakable.
Or so I think.
Lonnie, the man who murdered my husband, proves he’s still looking for me.
And just like five years before, he could rip everything away.
Grant included.
It will be up to me to walk in the power I’ve become familiar with and maintain control over my life. 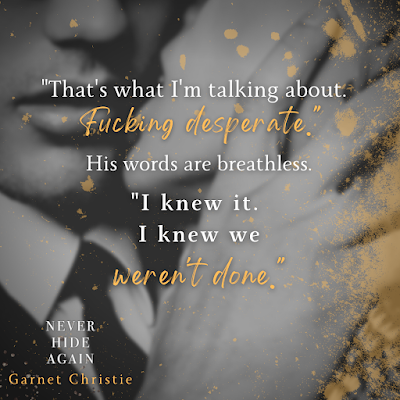 Garnet Christie is an author and Midwestern native living in the desert. Though she misses trees, Garnet admits there is an acrid beauty to the place that has been home for twenty years. A traveling enthusiast, Garnet has visited over thirty-seven states and when challenged with something new, whether it was ice skating, tap dancing, ballet, piano lessons, or horseback riding, she never backed down. Armed with that bravery, a childhood spent in the company of English teachers, and her creative soul, Garnet took to writing
She loves serving up Alpha male’s who are searching for their happily ever after, and paring them up with women who are equally, if not more, reluctant. Inspired by experiences in life, friends, family, and countless stories on television and books, Garnet writes whatever story is screaming at her the loudest.
When not writing, Garnet is found reading, dancing, and spending too much money on K-pop merch. All the above is achieved by drinking too much tea, avoiding sleep, and eating chocolate. Garnet also adores Italian food and will go to great lengths to hunt down a fantastic plate of Chicken Marsala that comes with a cannoli.