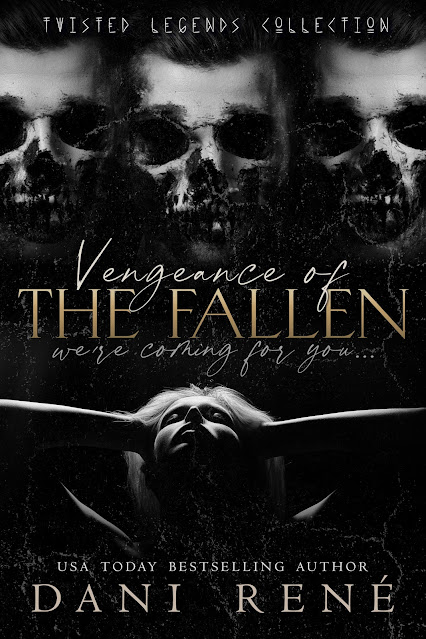 Title: Vengeance of the Fallen
A Twisted Legends Series Standalone
Author: Dani René
Genre: Dark Reverse Harem Romance
Release Date: April 14, 2022
BLURB
USA Today Bestselling Author, Dani René, brings you a brand new dark and steamy reverse harem romance which is part of the Twisted Legends Collection!
A new persona. A new life. But none of that would save me from them.
The Fallen are ruthless, demanding, and vicious, and they want me.
I thought I could hide from my past, but they know who I am, what I am. They want vengeance. And they will take it, no matter what.
They see me as pure, innocent, and they want to tarnish that veneer. But what they don’t know is that I have darkness clawing its way out of me. For so long, I try to hide it. I’m afraid of it, but when my three captors recognize the shadows lurking in my soul, I know it’s too late.
I am their captive.
They’re merciless, ruthless, and violent.
The Fallen have stolen me, but there is a far worse evil lurking outside, watching. It’s waiting for me.
The question is — Will these three men save me, or watch my demise?
ADD TO GOODREADS

This was my first book by Dani, a RH read, dark and twisted, enemies to lovers, captive, why choose – it was a good engrossing read from start to finish, hot and steamy, dark, gritty and violent.

Lucille is the daughter of Mahoney, abused and broken by her own father, she was responsible for him going to prison and has fled to London to start a new life under a new alias. But The Fallen have tracked her and have her in their sights, especially when they find someone else is snooping around their target, their whole life revolves around extracting vengeance from the daughter of Mahoney, their plan to cause her as much pain and suffering as they have suffered. But what they didn’t expect is to be attracted to her.

Each of The Fallen have different characters and have formed a unique bond between them, as a family unit, friends and sexually. Lucille is the one missing element that draws them all together as one. Of course they try to fight their attraction to her, they want their revenge after all, but she is feisty and sassy, has a dark side that is drawn to her kidnappers and the way they treat her, showing her submissive side and how she likes to be taken roughly. She wants to know their stories and how her father is involved in the downfall of their families, and she gets under their skin.

Their interactions are hot and steamy, with some MM, MMF, MFMM action involved, but the treatment of Lucille isn’t as dark as I expected it to be, with their sights set on revenge and retribution, she gets away with it lightly. Yes there is some graphic violence and degradation, but it’s nowhere near as bad as I was expecting.

That said it was a good read, fast paced with an engaging story line that held my attention.

Dani is a USA Today Bestselling Author of dark and deviant romance with a seductive edge.
Originally from Cape Town, South Africa, she now lives in the UK with her better half who does all the cooking while she writes all the words.
When she’s not writing, she can be found binge-watching the latest TV series, or working on graphic design either for herself, or other indie authors.
She enjoys reading books about handsome villains and feisty heroines, mostly dark, always seductive, and sometimes depraved. She has a healthy addiction to tattoos, coffee, and ice cream.
You can find more information on her website, www.danirene.com, or find her on social media, Instagram and Facebook being her favorites. Along with her newsletter, which you can sign up for here – https://bit.ly/DaniVIPs
AUTHOR LINKS
BOOKBUB
FACEBOOK
INSTAGRAM
GOODREADS
AMAZON
TIKTOK