I was going to be her prince and save her until…I became the villain.

She was the girl everyone bullied. I was the boy hiding a secret. She thinks she was just a bet, but she doesn’t know the truth. I watched her break and I tried to fix her, but some might say I took it too far. She was gone for nine months, but here she is…back on the first day of our senior year.

Samantha Saxton, the girl I’ve known my entire life and have loved just as long.

Everything was perfect until the night of prom when someone tried to ruin us. I won’t let them destroy what I have with her, I’ll do what I always do for her…retaliate.

I was done with the games, but I guess one more won’t hurt, right? They started it, they wanted to play, but I will always win.

***THIS BOOK COMES WITH TRIGGER WARNINGS THAT WILL BE FULLY LISTED AT THE BEGINNING OF THE BOOK. 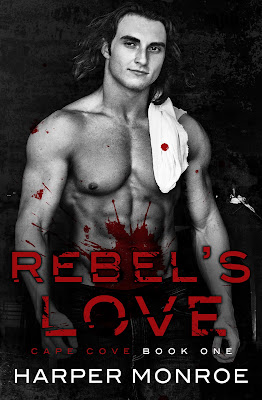 Harper Monroe is a new Indie Author with Rebel’s Love being her first published novel. She will be writing in the genres of bully romance and enemies to lovers.
She resides in Kansas with her husband, kids, and their pug. After a long day at work, Harper likes to watch Netflix or read a book when she can. Her and her son are obsessed with Stranger Things.
Her guilty pleasure is watching teen drama shows while eating sour candy and drinking a Pepsi.