SLEIGH RIDE WITH KELLAN
BY SOPHIA NIXS
A rugged, bearded mechanic becomes my knight in shining armor.
Traveling three hours to make my twin daughter’s Christmas come true.
I never expected him.
We are the complete opposites and he infuriates me like no one else.
Love was never on the cards for me.
A blizzard holds up my plans and I end up staying the night with him.
Everything I never thought I wanted.
I thought being stranded at Christmas was the only surprise I was in for. How wrong was I?
ADD TO GOODREADS
AMAZON US / UK / CA / AU
Free in Kindle Unlimited

FAKING IT FOR THE HOLIDAYS
BY SORAYA BANCROFT
Marley Fitzpatrick needs a decoy to stop her mother from trying to marry her off to every eligible bachelor she can back in her hometown this Christmas. Alex Foster, the hottest employee she’s ever hired has no plans this holiday season and agrees to be her fake boyfriend.
As luck would have it, they get stranded in a snowstorm, and the strict no fraternization policy Marley lives by is shoveled aside when Alex turns out to be the lumberjack she’s been waiting for.
ADD TO GOODREADS
AMAZON US / UK / CA / AU
Free in Kindle Unlimited 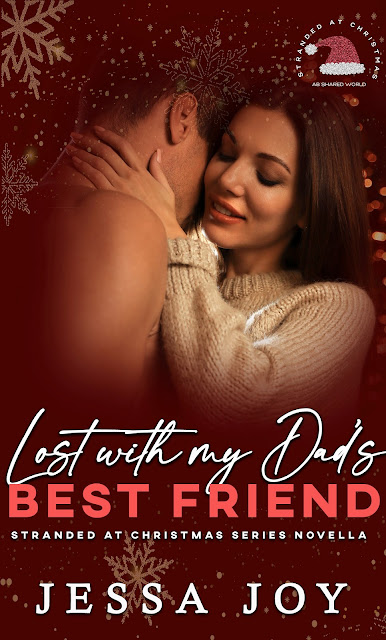 LOST WITH MY DAD’S BEST FRIEND
BY JESSA JOY
He’s a grumpy, gorgeous billionaire turned mountain man. We’re thrown together trying to make it back to Snowflake Falls for the holidays. Except the biggest snow storm in living memory is headed right our way. First we get lost, then the car gets trapped. He finds a cabin for us to shelter in and things start to heat up. I’ve never felt this good before. There’s just one huge problem. He’s my Dad’s best friend and totally off limits…
Part of the Stranded at Christmas series. Short, steamy, instalove read with a cute holiday HEA.
ADD TO GOODREADS
AMAZON US / UK / CA / AU
Free in Kindle Unlimited

DRIVING HOME FOR CHRISTMAS
BY BELLA LANE
She’s running…He wants her…Will being stranded bring them together?
Sarah Williams made a mistake in who she trusted and now he’s tormenting her with phone calls. She’s running and using work as the reason to protect her friend.
Nicholas Gamble is Ex-Special Ops Forces. He misses his team and the camaraderie that he and his team had. His family has pulled him into their business but it’s not what he wants, then he sees her.
When Sarah is asked to give a ride home to Roman’s friend, she never imagined it would be Nicolas Gamble, the man who looks like a God. Along the way, the phone rings and they get stranded in a small town in Vermont.
She is afraid to trust…He’s determined to show her he’s all in.
ADD TO GOODREADS
AMAZON US / UK / CA / AU
Free in Kindle Unlimited

READ THE WHOLE SERIES!
AMAZON US / UK / CA / AU
All free in the Kindle Unlimited