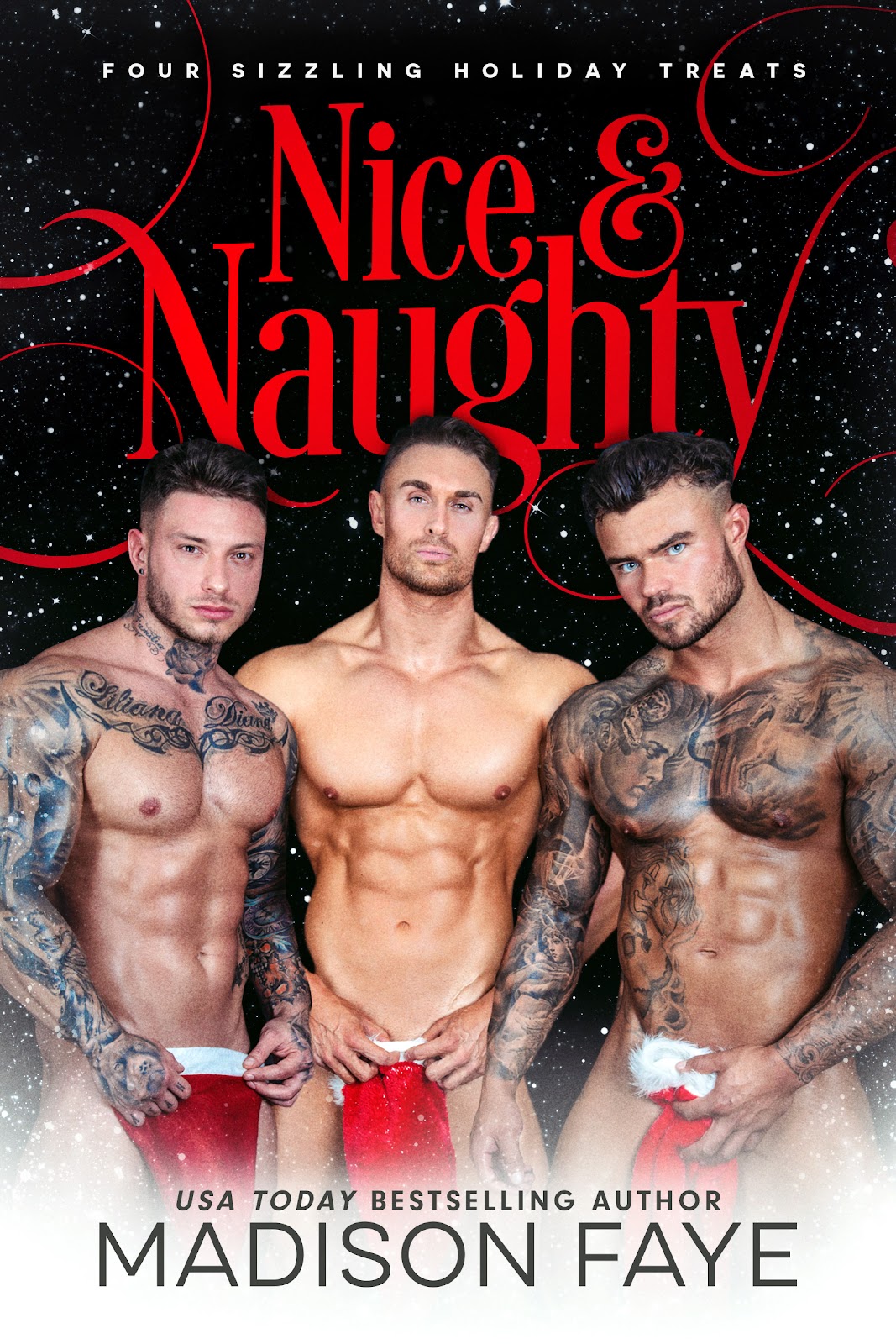 All He Wants For Christmas:
Veronica Till is at the end of her rope. Single, broke, about to lose her apartment, and all alone, on Christmas, in harsh, cold, New York City. When she bungles her latest job working the secretary desk for New York’s youngest, hottest, most demanding billionaire, she’s sure she’s going to get tossed out on her rear. But her new boss has other plans…
Nick Layne is a man obsessed with one thing and one thing only: working tirelessly and ceaselessly in building his empire. Except suddenly, there’s something else that’s caught Nick’s eye. She’s young, gorgeous, innocent, and lost, and with one look, he’s obsessed. No woman has ever turned his head like Veronica. No other woman has ever enticed him, and captivated him like this. And now, Nick knows exactly what he wants for Christmas—Christmas, and forever.
A Present For Daddy’s Princess:
Lia Stone already has it all—the huge house, the expensive clothes and jewelry, the fairytale life, and above all, the gorgeous, hunky husband twelve years her senior. But Barrett isn’t just “hubby”. Some nights, he’s also Daddy, and Daddy knows exactly how to make his little princess squeal and moan. And tonight, on Christmas Eve, Daddy’s on his way home with an extra special present for his pretty little princess…
From the moment he saw her and saved her from a terrible situation, Barrett new Lia would be his. People would have already called him a lucky man, with his wealth, power, prestige, and respect. But Lia is his crown jewel, and the light of his life. She’s also something else that no one else knows about: his pretty little Princess. And tonight, on Christmas Eve “Daddy Barrett” is on his way home with an extra special little treat for his little Lia. But only if she’s a very, very good girl…
Bad Bad Santa:
Sweet and innocent Bettina is a girl on the run. I mean, you would be too if your crook of a father offered your virginity and hand in marriage to appease a skeezy mob boss he owes money to. All alone in a remote winter cabin, Bettina thinks she’s safe at last. But she’s about to learn exactly how wrong she is…
Russian mob hitman Kristof is a beast of a man. A hunter. A killer. A savage hell-bent on completing his mission, no matter what it takes. His latest job has him hiding out as a Mall Santa, but when he spots his mark, the holly-jolly is going to quickly be replaced with something far darker and growlier. Cornering his gorgeous, tempting prey, Kristof finds himself torn between completing his mission, or taking exactly what he wants for Christmas this year…
Warning: this story contains themes such as noncon, restraint, and force that may be unsettling or triggering for some readers.
Claimed On Christmas:
Recently divorced Alessandra isn’t expecting much else besides Netflix and chilling alone this holiday season. But when three rough, growly, gorgeous delivery men arrive with the new bed she’s ordered, and when Alessandra realizes she knows them, well, she’s going to find out just how much stuffing her stocking can take…
When James, Gunner, and Max arrive at a glitzy home on Christmas Eve to make a delivery, the Ice Queen bitch who tormented them in high school is the last person they expect to find there. But it’s been years since then, and the three men are all grown up. Big, strong, rough, and ready for some payback. They’ve made a naughty list and checked it twice, and Alessandra is about to get three unexpected, BIG packages tonight…
Warning: this story contains themes such as noncon, restraint, and force that may be unsettling or triggering for some readers. 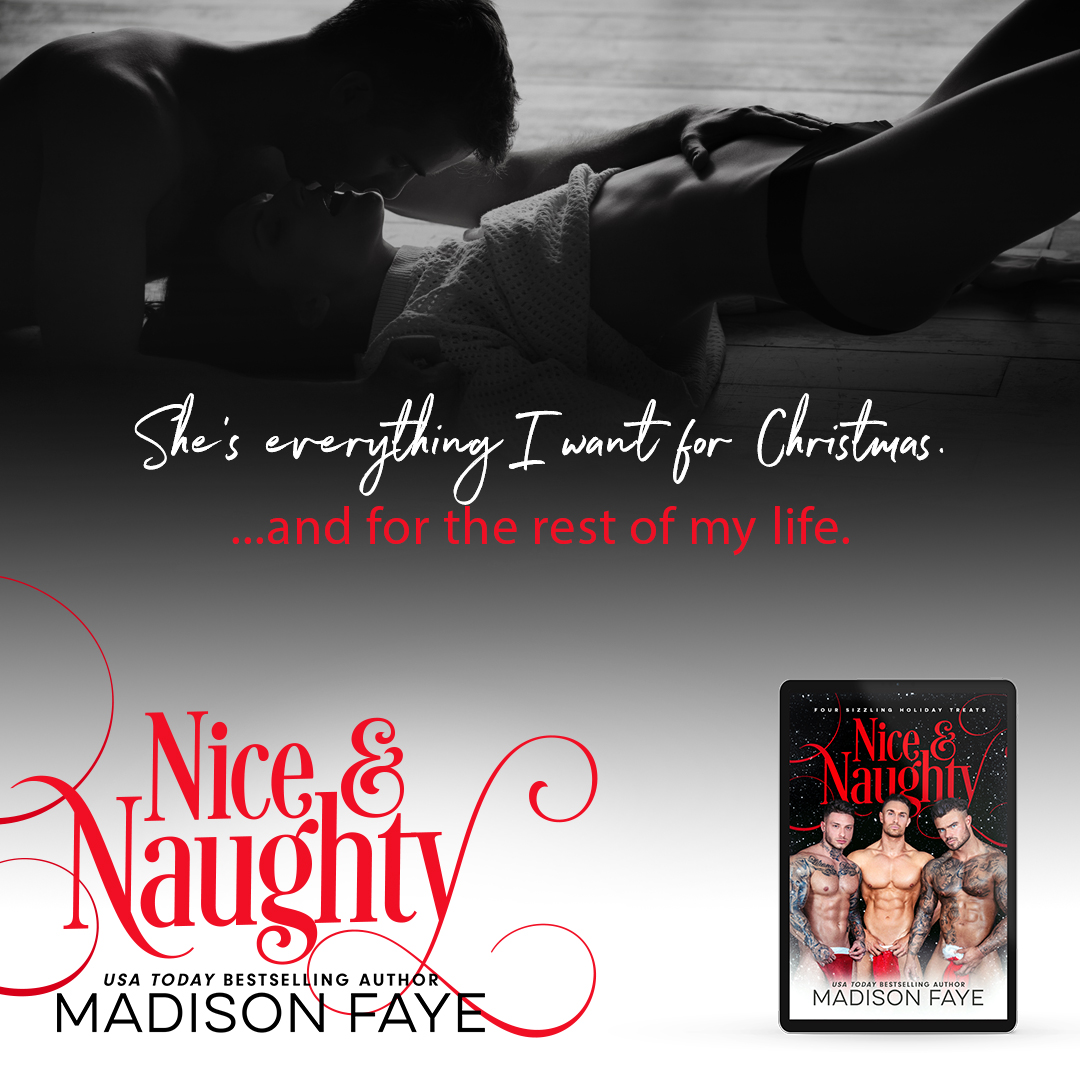 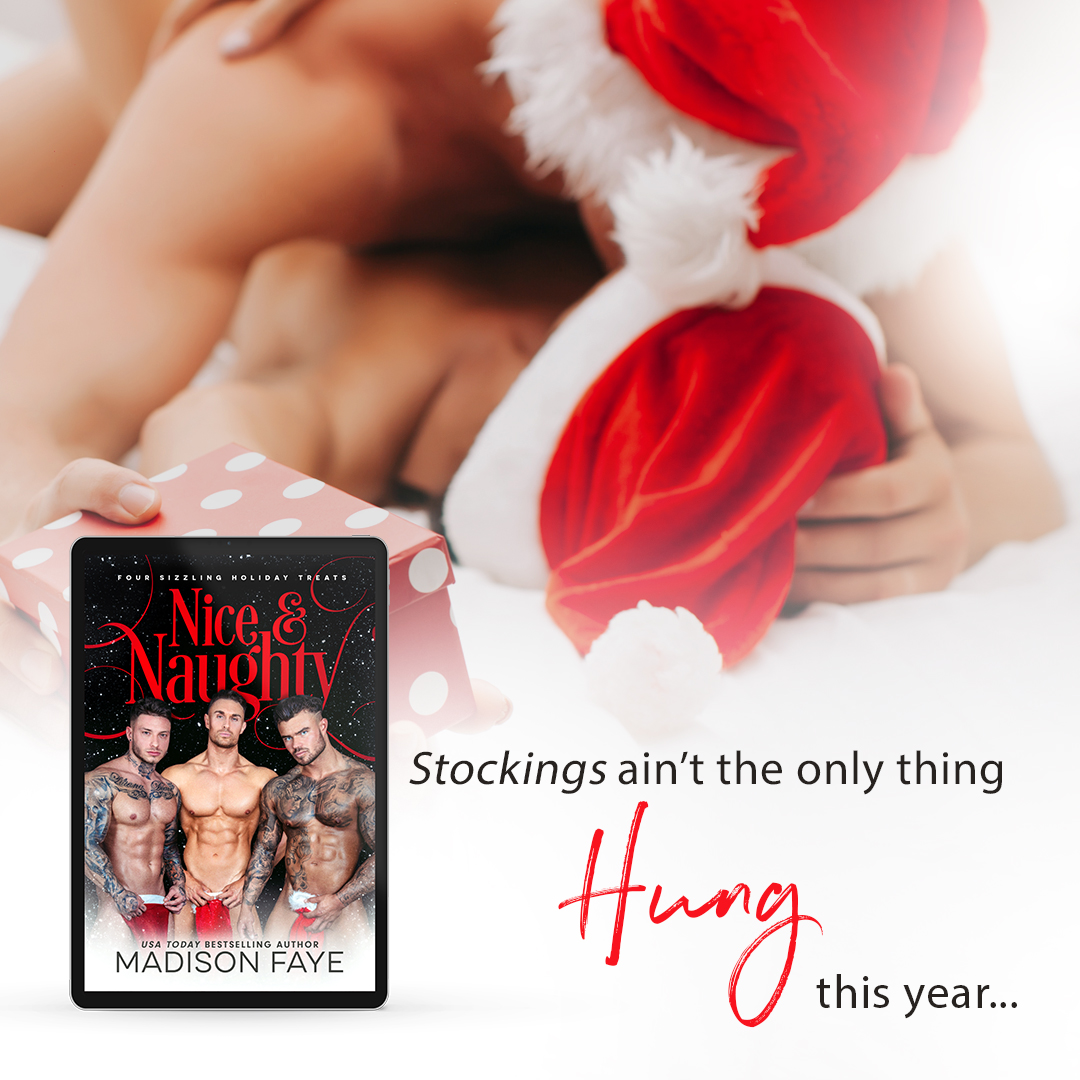 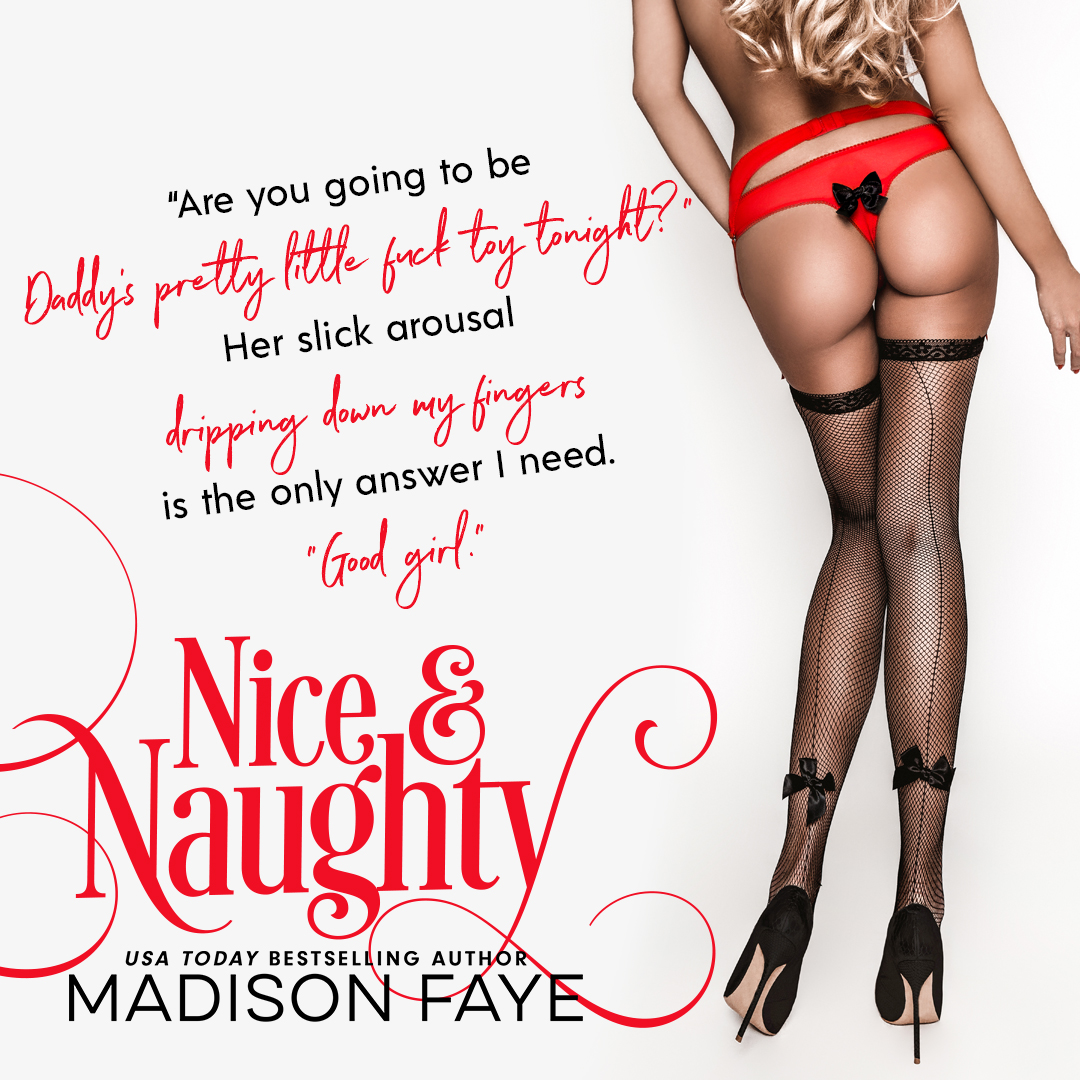 All He Wants for Christmas….. Nick Layne is a young billionaire who works hard and wants for nothing.  He’s had his eyes on Veronica for a while, in fact he has become obsessed with her, and when he gets the chance to move her to his PA he does just that, but finds he is at the end of his control is keeping away from her.  His control snaps when he finds her on her hands and knees crying with her debts all over the floor and coffee all over her.  Now’s the time to make her his.  A sweet, hot, erotic and alpha read.

Bad Bad Santa….. Russian mob hitman Kristof has never failed in any of his hits, until he is sent after Bettina.  She’s on the run after being sold off by her father to a mob boss for her virginity and hand in marriage.  He poses as Santa in the local mall to find Bettina, who he follows to a log cabin out in the woods, he is torn between completing his mission or claiming her until he sees her undressing in front of the window, his control snaps and the Beast takes over.  Definitely a darker tale with noncon, Bettina is taken by force at first until lust takes over and it becomes consensual.  Very very dirty, alpha, virgin, noncon, restraint, force all used, you have been warned!!!

Claimed on Christmas….. Alessandra is recently divorced from her high school sweetheart, who she took to the cleaners in their divorce, and is waiting for a new bed delivery.  She gets the shock of her life when 3 huge strapping delivery men, James, Gunner and Max turn up on her doorstep, 3 boys she knew and teased in high school, now turned men in a major way.  Now they are out for revenge for all the teasing she put them through, 3 against 1, nowhere to run, she has been their object of desire for years and now they are going to get her, whether she likes it or not.  M/M/M/F, very very dirty, alpha, noncon, restraint, force all used, again you have been warned.

Will certainly be reading more from this Author in the future.

USA Today and #1 Amazon bestselling contemporary romance author Madison Faye is the dirty alter ego of the very wholesome, very normal suburban housewife behind the stories. While she might be a wife, mom, and PTA organizer on the outside, there’s nothing but hot, steamy, and raunchy fantasies brewing right beneath the surface!
Tired of keeping them hidden inside or only having them come out in the bedroom, they’re all here in the form of some wickedly hot stories. Single-minded alpha heroes, sinfully taboo relationships, and wildly over-the-top scenarios. If you love it extra dirty, extra hot, and extra naughty, this is the place for you!
(Just don’t tell the other PTA members you saw her here…)
Madison’s books have also been featured on MTV.com, VICE.com, and (probably) numerous anti-smut government and concerned citizens watch-lists.
Twitter – Facebook –  Web – Amazon
Goodreads –Instagram